Interview with Cédric Villani on occasion of Euler Lecture 2015

Cédric Villani is professor of mathematics at Lyon University (France), Director of Institut Henri Poincaré, Paris, and fields medalist of the year 2010. On occasion of the Mathemacher-Award (May 2015) of the German Mathematical Society and his public Euler Lecture at Potsdam University (Germany) on May 22, 2015, Cédric Villani gave a nice interview which we publish below. Thomas Vogt and professor Günter M. Ziegler of DMV (German Mathematical Society) asked Cédric Villani about his passion for mathematics, how his life changed after he got the fields medal and about his favorite projects in the past, presence and future. 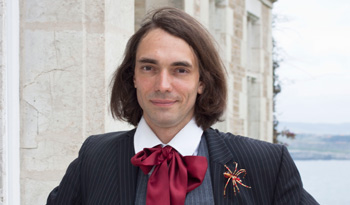 What was your first (positive or negative) experience with mathematics as a child that you remember?

I cannot remember my first experience with mathematics – for as long as my memories go back, I was interested in geometry and numbers. Filling out huge magic squares (when the number of subsquares is odd, there is this very simple recipe which I learnt and was glad to apply) and watching "Donald in MathMagic Land". I also remember that my father had bought at the flea market some books about mathematics for children, with nice illustrations; among other things it contained the golden ratio, Fibonacci sequence, life of Gauss, platonician polyhedra, and an attempt to make children understand all kinds of numbers. I read and re-read the paragraphs explaining complex numbers, which was attempting at an analogy with electrical current, but I could not, for the sake of me, understand what it was about.

When (at which age) did you start to love mathematics? And how did this love look like?

Interest in math was there from the start, it turned into tender love when I was initiated to proof making, in my teens. In those days I had small notebooks in which I would write down axioms, theorems, formulas and so on, learnt from school or from textbooks, as precious bits of knowledge. Looking back, I think that there were three defining periods: the first was the age of searching proofs (13-15 years old, dominated by geometry), the second one was the beginning of higher education, with the intensive training from preparatory school in Paris (17-19 years old, with particular inclination for algebra), the third one was the PhD (22-25 years old, definitely in analysis). At that point it was real passion.

While my parents were quite supportive of my going into higher education in sciences, they were themselves unable to help me after I became 12 years old or so. Without hesitation the two teachers who were most influential were those of my 13-15: many exercises, definitely out of the official guidelines, and they had a clear passion. From those days I remember two highlights: elementary linear programming, and barycenter-based geometric proofs. One particular story I remember: our teacher had given us a geometry exercise (not a particularly easy one – I think it was that exercise which I learnt at that age: take an arbitrary 4-gone, draw isosceles right triangles on all sides, and join the four outer vertices, opposite to opposite; then the resulting two lines cross at right angles and have the same length, although they need not cross in their middle) and the goal was to prove it in several different ways; you can do it with Cartesian coordinates but I was also given the task to get a proof in classical style, like the ancient Greeks would have done. I worked hard, day after day, to nail down this argument – I was proud to solve it eventually, but vexed when the teacher pointed out that my solution was unnecessarily complicated! Anyway, while this kind of theorems has obviously never been of any use to me, looking back to it, it is clear that this was my very first initiation to mathematical research.

Where and how did you receive the information that you would get awarded a Fields medal?

I received the Fields Medal information through a phone call at my office in Institut Henri Poincare, 6 months before the ICM in Hyderabad. In my book "Théorème vivant" (Das lebendige Theorem) I recount how it was: I was in the middle of a photo session for some magazine, in my office, picked up the ringing phone in a nonchalant way, and my blood froze when I heard that this was the President of the International Mathematical Union calling me; then my heart stopped when he told me "I have good news for you". After receiving the good news I started to shout in a very excited way over the phone, speaking of the most wonderful day of my life or whatever stupid thing you say in those moments, and promising to keep absolute secrecy. But on putting down the phone, I realized that the photographer was still in my office and had heard all of our conversation!! Fortunately, it seems that he did not listen or did not understand English, for he seemed unphazed, continued his work preparing for the next photoshoot, and asked me whether the rumor was true that I could get the Medal (to which I replied that I had no idea, for the sake of me).

In the first seconds, or minutes, or days after the call, nothing changes and you even start wondering if that phone call was not a dream or a hoax. But then come the written email confirmations, and a few colleagues are in the know. Six months to prepare and get psychological reinforcement for what was going to come... The big change has been in the amount of public engagement, and the relation to the world outside the mathematical community; inside the mathematics community, there is not much change. But for the politicians, businessmen, journalists, students, schoolkids... before the award you were anonymous for them, after it you are all in the light and your opinion counts for them. (In my case, part of this world already knew me because of my job at Institut Henri Poincaré; but it came to a full different dynamics with the award.) The ceremony itself, in the ICM, is all loaded with emotion and again, after it has happened you wonder if it was for real. Just being in the ceremony makes an impact, the whole world is watching in some sense; interviews flow in during that day...